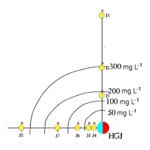 Land subsidence in Shanghai area is mainly caused by the excessive exploitation of groundwater resources in the past (Li and Wang, 2006). The Quaternary loose strata in the area are composed of unconsolidated clay, sand and gravel, which inter-bedded or inter-stratified, and contain rich confined groundwater in the sand and gravel layers. 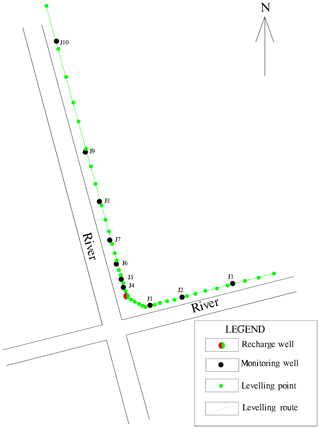 Therefore, artificial recharge groundwater is adopted in Shanghai area to promote the rapid rise of groundwater level and artificially increase the water head pressure in the aquifer, which results in the rebound of the water-bearing sand layer. At the same time, the upper clay layer is filled with a lot of water, the pore water level rises, and the cohesive soil expands. The superposition of the rebound of sand layer and the expansion of cohesive soil results in the rebound of the ground.

The testing site is located at the side beach of the LiuNan ancient channel. The thickness of the fourth confined aquifer is about 30.0–37.8 m, and the elevation of the aquifer top surface is −162.92 to −165.53 m. The lithology mainly consists of dark gray

medium fine sand and local medium coarse sand. The water conductivity coefficient of this aquifer in the test site area is about 692–1124 m2 d−1, and the specific yield of a single well is 23.60–52.00 m3 (h m)−1. In addition, the groundwater level of this aquifer is rising year by year with the decrease of groundwater exploitation in Shanghai.

Figure 3Rate of injection curve in the testing site. 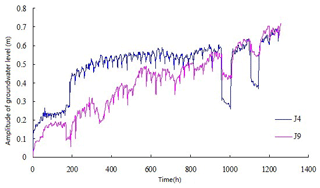 Figure 4Groundwater lever curve of J4 and J9 during recharging. 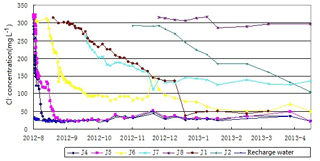 Figure 6Concentration of Cl− curve in groundwater during recharging.

Chloride ions neither form insoluble minerals nor are adsorbed by colloids, so it is called the most stable ions in groundwater and are often used as tracers to indicate the speed of water flow. 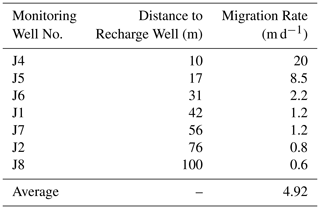 The groundwater diffusion transition zone formed by single well recharge presents a series of concentric circles (Fig. 7), and the influence radius and width of the dispersion zone are approximately equal in all directions.The results indicate that the water quality diffusion of single well recharge in an approximately isotropic aquifer is in concentric circles and diffuses far away, and the main factor affecting its migration rate is the groundwater flow field.

Based on the results, the following conclusions can be drawn:

All the geological environment monitoring data can be found in the website: http://www.sigs.com.cn/sigsonlines/ (last access: 6 March 2020). At the same time, all data generated or used during the study appear in this article.

JW did the formal analysis and wrote the paper. XY and TY were responsible for the conceptualization and supervision of the project. XH did part of the data acquisition and analysis.

This is a contribution of the IGCP-663 project “Impact, Mechanism, Monitoring of Land Subsidence in Coastal cities” of the IUGS and UNESCO. The authors appreciate the financial support provided by the Shanghai Science and Technology Commission (No. 18DZ1201100) for this work.

This research has been supported by the International Geoscience Programme (grant no. IGCP 663) and the Shanghai Science and Technology Commission (grant no. 18DZ1201100).

Wei, Z.: Analysis on stress-strain relationship of the fourth aquifer in Shanghai, Hydrogeology and Engineering Geology, 1, 1–4, 2002 (in Chinese with English abstract).