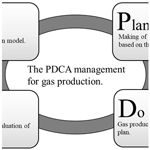 In Chiba prefecture in Japan, it has been reported land subsidence for many decades. One of the causes of land subsidence is considered gas production. To reduce and control land subsidence, we applied PDCA method in a certain new development area. As a result, we could maintain successfully the land subsidence less than the target value, 20 mm yr−1 at the present moment.

The Southern Kanto gas field, the largest field of natural gas dissolved in water in Japan, is located primarily under the Chiba prefecture (Fig. 1). In this field, eight companies produce 460 million m3 yr−1 of natural gas (Japan Natural Gas Association, 2019). On the other hand, there are some environmental issues such as land subsidence. Generally speaking, land subsidence results from various causes such as natural compaction, tectonic movement and ground water withdrawal for agricultural or industrial use.

As a part of our efforts, we have been conducting land subsidence PDCA management in a certain new development area. The land subsidence in this area is thought to be affected by ground water withdrawal for agricultural use and tectonic movement as well as natural gas production. Because the study area is rural, the pump discharge rate is not clear but the ground water is withdrawn for agricultural use to some extent. In addition, Chiba prefecture containing the study area is located near the plate boundary between the Pacific Plate and the Philippine Sea Plate. In this area, the earthquakes often occur. 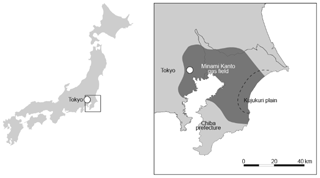 PDCA consists of four steps (Plan, Do, Check, Act). It is based on the “Shewhart cycle” (Moen and Norman, 2006; Chakraborty, 2016). PDCA is a continuous feedback loop to identify and change process elements to reduce variation (Gupta, 2006). In general, PDCA aims at the control and continuous improvement of processes and products.

As a measure for controlling land subsidence, we apply PDCA method in a certain new development area and repeat it every year (Fig. 2). 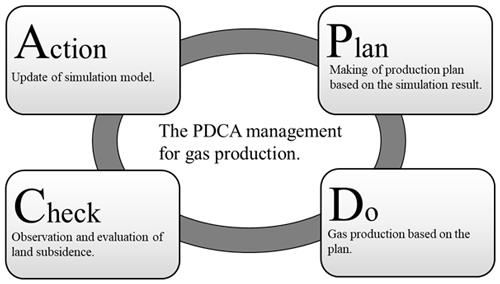 We make production plan based on the result of geomechanical reservoir simulation. The simulator is called “JARAS/3D” which was developed as a result of joint study between Japan Oil, Gas and Metals National Corporation (formerly Japan National Oil Corporation), and the eight gas production companies in Southern Kanto gas field. This simulator is adjusted for Southern Kanto gas field and it can evaluate the amounts of land subsidence associated with natural gas production.

We observe the land subsidence and compare it with the criterion every month (Fig. 3). To observe land subsidence, measurement of the relative height from the reference point which is free from the effect of the natural gas and formation water production is necessary. Such point is far from natural gas and formation water production area. Therefore, the levelling requires a huge time to obtain the observation result. On the other hand, GNSS (Global Navigation Satellite System) can obtain it continuously and rapidly. To observe land subsidence at the target points rapidly, we apply the combination of GNSS measurement and levelling. 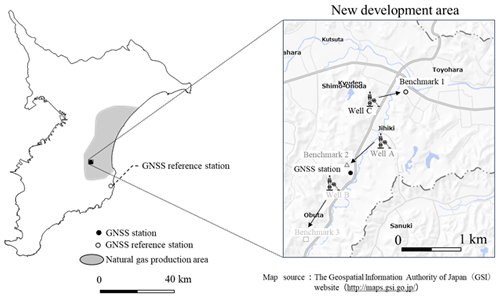 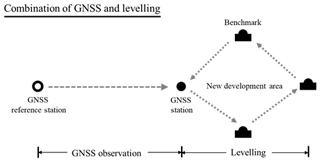 To get the baseline data, the GNSS measurement has been conducted before the natural gas and formation water production start.

Furthermore, we compared the land subsidence results with those by the local government.

We observe not only the land subsidence but also the water level which reflect the formation pressure. We update the simulation model based on these observation data every year if necessary. Commonly permeability and firmness are modified to reproduce the water level and land subsidence respectively. Then we use the updated simulation model on the Plan in the next PDCA.

As a result of the PDCA management, we could maintain successfully the land subsidence less than the target value, 20 mm yr−1 at the present moment. In addition, the observation results conducted by the local government shows less than 20 mm yr−1 (Fig. 5).

The results of our work show us possibility to control land subsidence. By repeating this method every year, we will improve the management method. On the other hand, they also show us some issues as mentioned in Sect. 3. To improve this method, we will study on these problems in the future.